I decided to make a Hot Toddy.

I grew up making it with Honey, Lemon Juice, Whiskey / Bourbon and Hot Water.

I didn’t grow up knowing what the best Bourbon is.

I’m sure it makes a difference.

While recently in Seattle having a very special Family Gathering, I was introduced to a yummy Hot Toddy.

That one included a Cinnamon Stick and Whole Cloves.

As I said, it was yummy, and it was crafted by my “Little Sister” Barbi‘s beau as I was also introduced to him for the first time.

It was also made with Tequila at my sister’s suggestion, but that is not of matter here.

It is New Year’s Eve and my son just went out in the single digit cold to meet some friends.

So I decide I’m going to make a Hot Toddy for myself.

I scraped some crystallized honey from the bottle. It isn’t that old, but where it resides on the kitchen counter can get pretty chilly when it is so cold outside.

You should feel the air when I open the kitchen cabinets along the outer wall when it’s cold outside.

I have a few cinnamon sticks but they are part of the decor in a very cool shaped bottle so I stoop to the powdered cinnamon I have in the cabinet.

I have also run out of Whole Cloves so Ground Cloves it is.

I do have some dried lemon zest, grated by my son during another culinary journey.

Note: I am not a foodie by any means. No. No culinary genius. I wish I was.

I’m missing the visual of the floating Cinnamon Stick.

Find the Rosemary and snip a sprig.

Snip another after quick consideration.

I didn’t want to have to bundle back up to get more.

Snip a couple sprigs of Thyme as I am walking back to get inside. (See one of my very first blogs, that happens to be about Thyme, here.)

Sprig of Rosemary in the jar.

I opted not to use the “thyme” this “time” in the Hot Toddy but instead use it for something else, though a few leaflets did drop into my drink.

The powdery spice and the semi congealed honey are settled at the bottom, slightly stirred by Rosemary sprig recently submerged which results in looking more like a specimen jar from a swamp or otherwise murky waters. hahaha 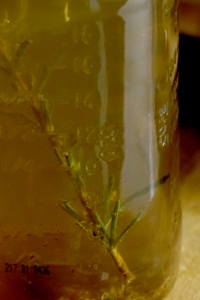 It tasted pretty darn good, though.

And then my son returns home, shivering and with painfully cold hands requiring a hot chocolate to warm both inside and out.

I checked on Hot Toddy with Rosemary today.

I found this Yummy Recipe via Instructables.

I’m out of Ginger.